As previously disclosed in Form 10-K and 10-Q the Company filed in 2015, the Indonesian government introduced a six-month moratorium on issuing new fishing licenses and renewals so that the country's Ministry of Maritime Affairs and Fisheries ("MMAF") could monitor the operations of existing fleets and to fight illegal fishing activities in early December 2014. As a result, all licensed fishing vessels operating in Indonesian waters have been informed by the Indonesian government to operate within strict guidelines and subsequently to cease operation, in order to avoid potential enforcement actions by the Indonesian Navy such as boat seizures.

Among the 135 fishing vessels, 117 of these vessels operate in the Arafura Sea of Indonesia. To cooperate and comply with the Indonesian government's fishing license check procedures, in January 2015, the Company reduced its operation; and from February 2015, Pingtan temporarily ceased operations of the 117 vessels which are licensed to operate in Indonesian waters.  Since the Company derives a majority of our revenue from this area, this temporary ban caused a significant drop in production.

In November 2015, the Indonesian government announced that the moratorium had concluded. The Company's expectation is that the MMAF will implement new fishing policies and resume the license renewal process although this has not yet occurred. In the interim, the Company's financial results will continue to be materially adversely affected by this moratorium.

Below is a link to the news release announces the Indonesian government concluded its fishing moratorium from Ministry of Marine Affairs and Fisheries Republic of Indonesia (in Indonesian): http://kkp.go.id/index.php/berita/moratorium-berakhir-menteri-susi-ingatkan-pelaku-usaha-patuhi-aturan/

2015 Financial Highlights (all results are compared to prior year):

Commenting on the results, Mr. Xinrong Zhuo, Chairman and CEO of the Company, commented, "In 2015 we faced substantial challenges from the moratorium enacted by the Indonesian government, . In November, the Indonesian government concluded the moratorium but has not yet implemented its new fishing policies and authorized fishing resumption in Indonesian waters. As a fully licensed fishing company, we look forward to operating in a more secure and protected environment and to those benefits associated with a more highly regulated market in upcoming months. In 2015, we expanded our fleet with six fishing vessels into Western and Central Pacific Ocean of international waters to focus on higher margined products like tuna and squid. We seek to continue to expand into new fishing territories to help reduce our dependency on a single region, diversify our revenue stream and fulfill the needs of our customers."

The Company encourages investors to review detailed information on each vessel (including age of vessel / tonnage capacity) and revenue breakdown from its catch available in its 2015 Annual Report on Form 10-K.

Revenues from the fishing business for the three months ended December 31, 2015 was $14.0 million compared $56.5 million for the same period in 2014. The decrease was primarily due to the Company temporarily ceasing its operations in Indonesia waters since February 2015 resulting from the moratorium described above.

The Company's gross margin for fishing business was -64.0% for the three months ended December 31, 2015, compared to 33.8% in the prior year period.  The significant decrease was primarily due to the reduced scale of operations resulting from the moratorium, which is reflected in the allocation of fixed costs, mainly consisting of depreciation and labor costs, to cost of revenue. The ordinary repairs and maintenance fees were incurred in the periods to maintain vessels in operating condition and represent revenue expenditures.

The Company's gross margin for the fishing business was -4.6% in the fiscal year ended December 31, 2015 compare to 33.2% in that of 2014, the decrease was primarily due to the same reasons described above.

For the three months ended December 31, 2015, selling expense for the fishing business was $0.5 million compared to $0.8 million, in the prior year period.

For the fiscal year ended December 31, 2015, total selling expense was $1.9 million compared to $2.7 million in the same period of 2014. The decrease was primarily due to the same reasons described above which resulting in less storage fees, insurance fees, and shipping and handling fees.

For the three months ended December 31, 2015, general and administrative expense for the fishing business was $0.4 million, compared to $2.1 million in the prior year period.

For the fiscal year ended December 31, 2015, total general and administrative expense was $2.9 million compared to $4.5 million in the same period of 2014. The decrease was primarily due to bad debt recovery based on our periodic review of accounts receivable balances and management's evaluation of the collectability of receivable balances.

Pingtan also announced that it will discuss financial results in a conference call on Thursday, March 10, 2016, at 8:30 AM ET.

The conference call will also be webcast live.  To listen to the call, please go to the Investor Relations section of Pingtan's website at www.ptmarine.com, or click on the following link: http://ptmarine.equisolvewebcast.com/q4-2015.

To view the original version on PR Newswire, visit:http://www.prnewswire.com/news-releases/pingtan-marine-enterprise-reports-financial-results-for-the-fourth-quarter-and-year-ended-december-31-2015-300233621.html 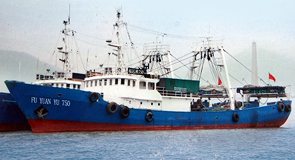